Warts are a fairly common skin disease that is accompanied by the appearance of tumors on various parts of the body that appear as a result of human papillomavirus, regardless of age and condition. In appearance, the wart resembles a small tubercle and brings aesthetic and physical discomfort. These tumors can cause unpleasant sensations – such as sweating of hands, feet, face, so you need to deal with them in effective ways. Today, there are 2 main methods by which warts disappear forever: laser and liquid-nitrogen removal of warts.

Removal of warts in Lviv with liquid nitrogen or cryodestruction, if necessary, can be performed for you in our cosmetic center “Janvi”. The price for removing 1 piece is UAH 130.

Features of technology of cryodestruction of warts

Most harmful growths will be removed after the first procedure! If the warts are large or their growth occupies a significant area of ​​skin, you will have to undergo several procedures, the exact number of which will be prescribed by a cosmetologist-dermatologist.

Note that cryodestruction of warts is a really effective and completely safe method. In places of removal after healing of the skin there are almost no traces.

At the Janvi Cosmetology Center in Lviv, we remove warts for both adults and children with the help of modern American Cryoalfa equipment, which allows you to perform the procedure quickly and painlessly. 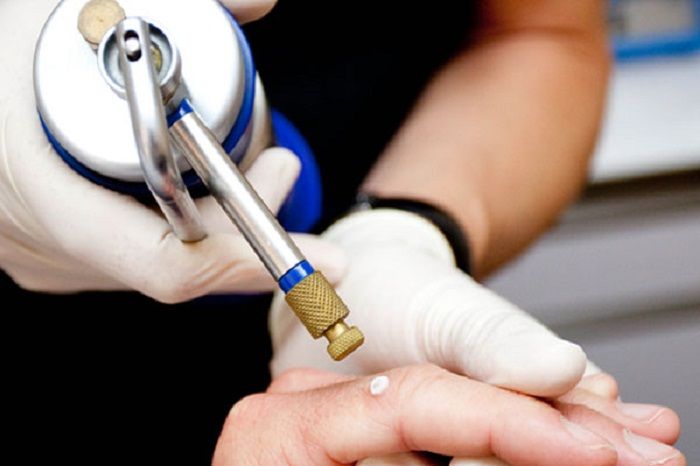 The advantage of cryodestruction with “Cryoalfa” is that it is the only method of removal that increases antitumor, antiviral, antimicrobial, antifungal immunity. The fabric is not removed by this method, but is destroyed by cold. Remaining in place in its destroyed state, it carries the main characteristics of the etiological factors of the pathological process, becoming an antigen, causing the production of antibodies against the pathogen that caused the disease. Phagocytosis is activated, directed against similar pathological elements throughout the body that have been subjected to cryodestruction.

The gas from the cartridge comes out at a pressure of 55 bar, so the cryowave goes deep into the skin without increasing unwanted tissue damage around the wart. In 4-5 seconds the depth of freezing reaches about 1 mm, for about 10-12 seconds. the depth of freezing reaches a maximum of 3 mm. The constant temperature of nitrogen is 89°С (liquid N2O).

Warning – people who are allergic to the cold should choose another method of removing warts.

Sign up at the Janvi Cosmetology Center for cryodestruction of warts in Lviv on weekdays:

TOP 3 most popular procedures in “Janvi”